The most beautiful street in the city

Historically, the city was known as Kauthara under the Champa Kingdom. The name Nha Trang is a Vietnamese pronunciation of a Cham word “Eatran” or “Yjatan”. Ea or Yja means river, and Tran means reed. According to the locals, there were once lots of reeds along the Ngoc Hoi River which winds its way through the town. Ngoc Hoi was later renamed Nha Trang River.

Another theory of the origin of Nha Trang’s name has a more amusing twist. Long ago, in this part of the country, all the houses were made out of the reeds and mud gathered from the river. The only house that was made out of bricks was the house belonging to Dr. Yersin, a French immunologist who made his home here.

The house itself was painted prominently in white and could be seen by vessels coming from far away. Once, when a foreign ship was passing by, the captain asked his translator where he was. The translator, not knowing where they were blurted out Nha Trang, meaning “white house” in Vietnamese. The captain duly noted on his chart and the name stuck.

Tran Phu was called Duy Tân Street before 1975 and is named after Emperor Duy Tân (1900-1954). He was the eleventh emperor of the Nguyen Dynasty, and reigned from 1907 to 1916, after Emperor Thành Thái. When sending his father into exile, the French decided to pass the throne to Emperor Duy Tân when he was very young. However, he fought against the French and secretly contacted the leaders of the Vietnamese revolution. Because of this, he was exiled to Reunion Island in the Indian Ocean. After Duy Tan, Khai Dinh ascended to the throne, and then Emperor Bao Dai, the last Emperor of Nguyen Dynasty.

Emperor Bao Dai spent a lot of time in the magnificent villas in Cau Da with his Royal Family, and his most beloved concubine, Mong Diep. A visit to the palace will reward travelers with a taste of Vietnam’s past while enjoying some of Nha Trang’s best views. He took great pleasure in sailing in Nha Trang Bay to go fishing around the offshore islands, relax and unwind on empty beaches and enjoy the nutritious seafood reserved only for the king such as lobster, abalone, tuna fish and sea cucumbers and salangane bird nest which are very abundant in Nha Trang Bay.

Located in central Vietnam, the sunkissed town of Nha Trang hugs a seven-km-long stretch of golden sand, making this the perfect place to get a dose of sun, sea and fresh seafood. Clear blue seas dotted with offshore islands offer excellent opportunities for diving, fishing and snorkeling, while the town itself is home to some interesting sites, including a massive white Buddha statue and a cluster of Cham towers built between the 7th and 12th centuries. For a truly dirty pleasure, try the mineral mud baths warmed by natural hot springs.

A lively coastal city, Nha Trang overlooks the aquamarine waters of the East Sea. While the city today is a modern, pleasant town, the area itself was quiet and undeveloped until the arrival of the French – who immediately set about transforming it into a seaside resort. Even during the turmoil of the Vietnam War, Nha Trang was a popular vacation destination for soldiers on leave; and this trend continues today with an influx of tourists and sightseers.

Long stretches of pristine sand and clear waters offer sun-kissed relaxation in the bustling colonial coastal town. Tran Phu Beach, a seven-kilometre stretch of golden sand, has a backdrop of forested mountains and is bordered by palm trees, colourful flowers, and a range of beachside attractions such as bars and restaurants.

With 300 days of sunshine each year, the once laidback beach town has become Vietnam’s most happening seaside spot. Nearby Cam Ranh and Van Phong in Khanh Hoa have also been opened up to high-end tourism development and this can only be of benefit to Nha Trang.

Indeed, if you’re visiting Nha Trang for the first time, it is a colourful place. Everywhere you look are splashes of colour. Surrounded by steep, dark, green hills, the town hugs a long curve of yellow beach and a bay as turquoise as any fancy cocktail.

All around you are yellow colonial mansions, red flame trees, and a collection of beachside eateries and relaxation spots, vendors selling balloons and beach toys, and beach umbrellas in myriad colours.

7 km long, Tran Phu Street stretches from Tran Phu Bridge with Cai River and Ponagar Towers to Nha Trang port, where Emperor Cruises (www.emperorcruises.com) docks,  and is considered one of most beautiful seaside roads in Vietnam.

Nha Trang has several unusual sites to take in, including the 9th century Po Nagar Cham towers and a stunning, 14-metre tall statue of Buddha at Long Son Pagoda. Perched on the hills overlooking the town, the gleaming white Buddha commands a stunning view of the city and the sparkling sea beyond.

It would be reasonable to say that Tran Phu Street represents the beauty of Nha Trang city. Along the east of the street is a white sandy beach with romantic coconut trees. As a result, tourists coming to Nha Trang like to stroll along Tran Phu street to enjoy the take in the wonderful views of the bay and islands offshore. Once the sunset’s red glow has faded, you’ll see the lights of fishing boats lined out across the bay like a string of glowing pearls.

While you sleep, the fishermen are at work, catching the delicious seafood that will show up in the city’s restaurants and markets the next day. But by the time you finish your morning coffee they’re home asleep and the beach is devoted to blissful relaxation.

In addition, Phu Dong Park located on the beach is an interesting recreation ground. Thu Dong Water Park, right on the beach front. Highly popular with families; it has hydroslides, shallow pools and fountains.

Further to the Nha Trang Port, it is the Bach Dang Park on the shore of East Sea. Named the great victory at Bạch Đằng, 938, has an important significance to Vietnam, because it ended 1000 years of first Chinese domination of Vietnam (The Long Eclipse) in History of Vietnam, opening up an independence age for the nation of Vietnam.

One general who reused this tactic was Trần Hưng Đạo in the Battle of Bạch Đằng (1288); Trần Hưng Đạo also understood the requisites behind this tactic and applied them successfully in pushing the Mongol army out of the Bạch Đằng River. Using poles to destroy ships is not easy to pull off: it is no coincidence that both Ngô Quyền and Trần Hưng Đạo are considered great generals in the History of Vietnam.

The Bach Dang Park covers over 8000 sq meters, with lot of trees and gardens, it has a giant statue of General Tran Hung Dao facing to the East Sea. The statue is 10m high, and the base is constructed of granite and marble. It was constructed in honor of the general, known in Vietnamese history as a hero who defeated the Monglian invaders.

In this park, there are also 21 steles detailing the history of Truong Sa (Spratly or Paracel Islands), proclaiming the full sovereignty of Vietnam of this archipelago with old records from the French government and imperial Hue proving this. China invaded and took Gacma Island, and built 7 artificial islands and military bases. It now lays claim to 90% area of the East Sea, and is disputing a huge tract of sea area Taiwan, the Philippines, Malaysia, Brunei, and Vietnam.

The park has Barringtonia asiatica is a species of Barringtonia native to mangrove habitats on the tropical coasts and islands of Truong Sa, and were given as a gift to the soldiers to Khanh Hoa Province. This represents a symbol of the hardiness and toughness of the Vietnamese soldiers.

It is a small to medium-sized tree growing to 7–25 m tall. The leaves are narrow, 20–40 cm in length and 10–20 cm in width. Fruit produced by the trees is known as Box Fruit (square fruit), due to distinct square-like diagonals jutting out from the cross section of the fruit. The fruit measures 9–11 cm in diameter, where a thick spongy fibrous layer covers the 4–5 cm diameter seed

Further along towards Nha Trang Port, the former airport will be replaced by the new city and administration complex according to the newest mater plan of the Planning Department.  At the end of the boulevard, we can see Bao Dai Villas and The Nha Trang Institute of Oceanography, one of the oldest institutes in Indochina, where research is conducted on the marine life of the East Sea.

On the opposite side, houses and hotels close together make the street very busy. Many services like restaurants, hotels, tourist agencies and stores are located here.

It’s an opportunity now to cruise in style to enjoy the spectacle of seeing the twinkling lights of Nha Trang on a sunset cocktail cruise on board Emperor Cruises and discover the landmarks on the mainland and enjoy your moments and bring home memories of one the most beautiful seaside roads in Vietnam. 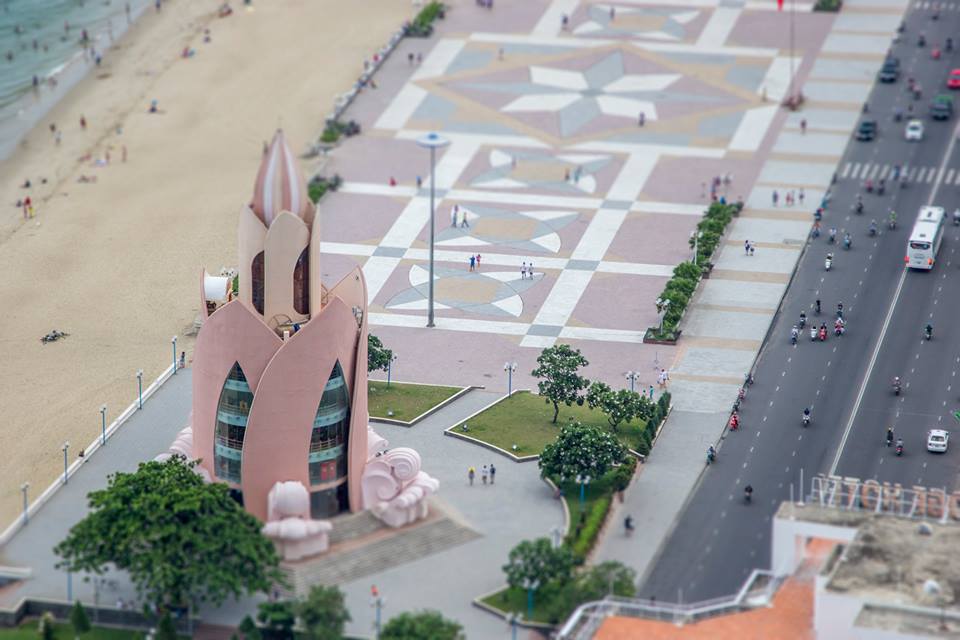 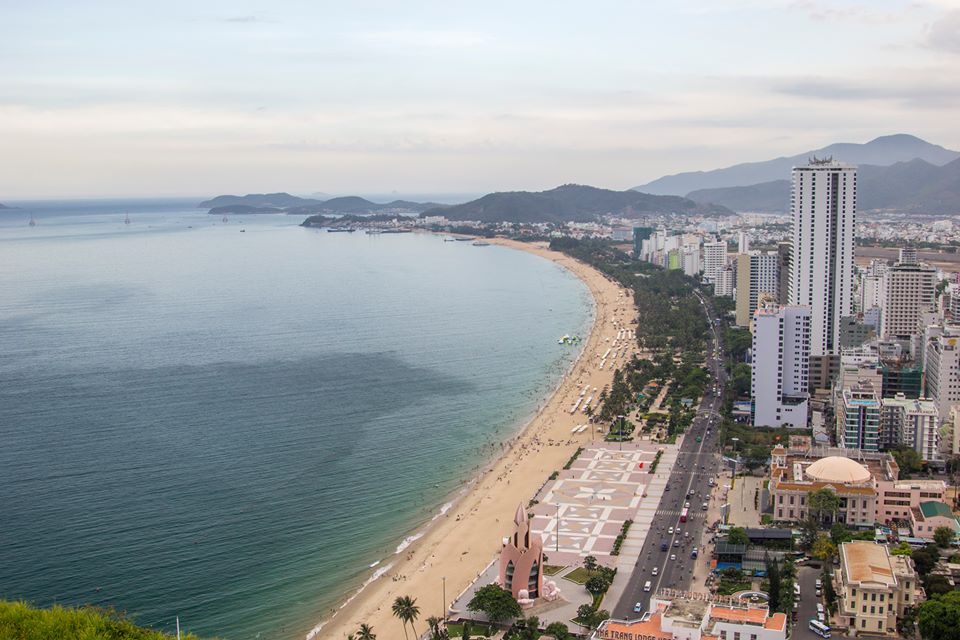