In search of something different to the standard boat trips that are the norm around Nha Trang Bay, Discover Nha Trang was invited by the awesome guys at Flyboard Nha Trang on a private Jet-Ski tour to Monkey Island. My sister was visiting and it just happened to be her birthday, and so we were looking for a trip that would be fitting for the occasion – and this one certainly delivered in terms of excitement and exhilaration.

The day began at the leisurely time of 12pm at the Flyboard base at Sunshine Bar & Restaurant behind Po Nagar Temple, on the banks of the Cai River. For those of you who haven’t tried this place, you will not be disappointed as the owner, Shohei Yada serves up a treat of authentic Japanese cuisine and western favorites. Delicious home-made Ramen noodles were the order of the day, to give us fuel for the trip ahead of us, and we lazily chatted to the staff and another group of tourists who would be joining us on the expedition. The prime selling point of this jet ski tour is that you get to drive your own jet ski, and the high-powered Seedoo models are excellent quality, comfortable and extremely powerful. After a quick briefing from Stan and Vitali (our 2 guides for the day), we set out at a very slow pace along the river to bring us under the Northern Bridge at Tran Phu Street and straight out into the open sea. Although the weather was fairly gloomy and overcast, there was no sign of rain and the waves were pretty calm as we headed out towards the islets and islands that dot the coast of Nha Trang.

Here we were able to put these Seedoos to the test and there are few things more fun that ripping across the waves on your own jetski. My sister and I took turns in driving the jetskis and had an awesome time trying to get some air off the waves or from the break of the guys in front who were busy guiding us in the right direction, snapping photos and taking footage with the Go-Pro (SEE IT HERE):

While our other group was lagging behind, we had full carte blanche to go wherever we pleased, and so we spent most of the time criss-crossing the breaks and seeing just how far we could push the machines without falling into the water. The trip to Monkey Island took about 45 minutes and as we pulled into the docking station, the waters were calm and a beautiful turquoise blue. We spent some time swimming here in search of corals before ambling up to the beach chairs. Having already visited Monkey Island a few times over the years, we chose to hit the sun-loungers for some thirst quenching watermelon and a couple of beers. The other group was visiting the island monkey sanctuary, which is home to some 1500 primates and other animals such as bears and elephants. The tour of the island takes around 90 minutes so we took a short nap as we waited for them to return to the beach. 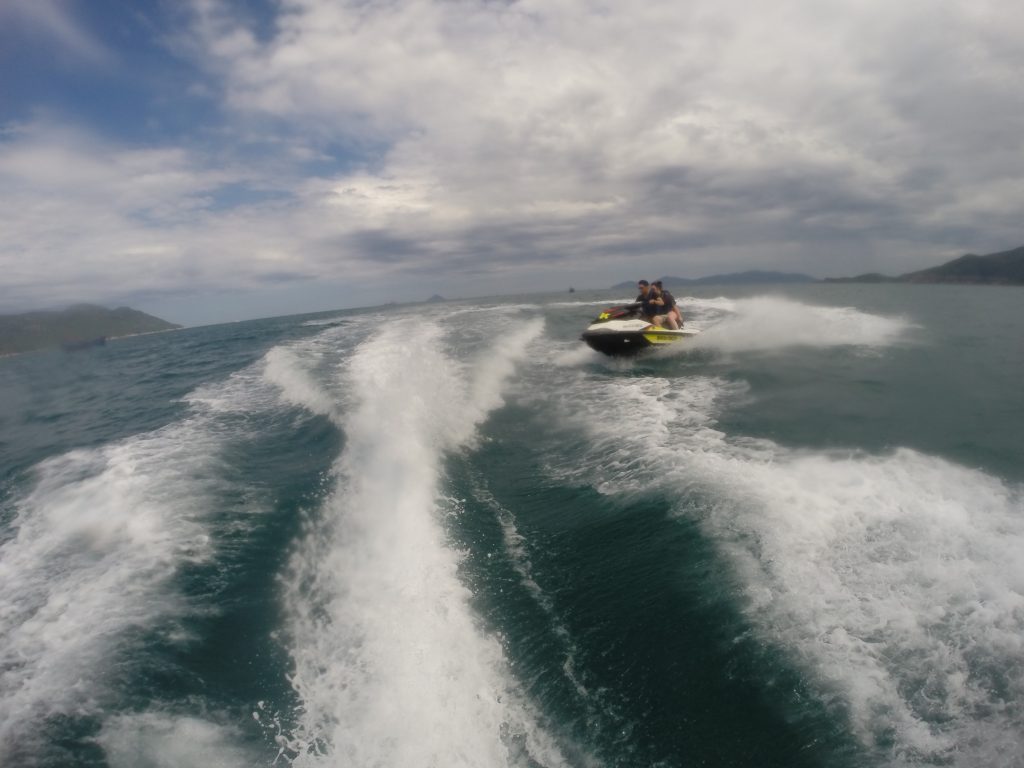 The return leg of the jet ski journey is even more fun than the first leg, as the wind picks up quite a bit in the afternoon – and this means bigger and better waves with which to attack on the Seedos. We raced back towards Nha Trang at breakneck speed and caught some really big waves that had started to appear. As we entered the estuary once again, we were greeted by the numerous fishing and squid boats who were on their way out to sea for the evening’s catch, and some gave curious glances as we eased the jet skis back to Sunshine Bar and Restuarant.

I must say, it was the best “on-sea” tour we’ve ever had the pleasure of doing in Nha Trang. The combination of great guides, your own jet ski and being out on the open sea makes it the perfect trip for the adventure seeker (tourists or expat). Once back at the restaurant, we had a couple of beers with Mr.Yada and the guides and checked out the FOOTAGE they had taken. I’ll definitely be trying this again, or maybe the incredible Flyboard Hovercraft lessons they also offer on-site.

– Sunscreen, Sunglasses and some sea-worthy clothes