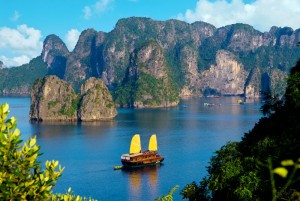 Natural wonders of the world, the pride of Vietnamese is a beautiful beach famous Bay – Ha Long. Thousands of undulating rocks in the water shimmering waves both boast spectacular but also very soft and graceful, lively. This bay was also associated with an age-old legend of our nation building.

For those has not had the opportunity to visit this natural wonder, quickly arranged for your family , friends, a visit to this place to experience the exotic beauty of it . 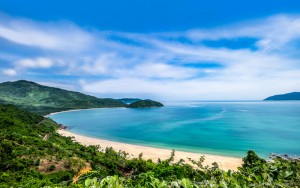 It is a land of great potential by natural landscapes. Above the bay is the Hai Van Pass. Below is the Lang Co beach with blue water. Currently, Lang Co bay has officially become the 30th member of the club of the most beautiful bays in the world (Worldbays Club).

Xuan Dai Bay located about 45km north far from Tuy Hoa city, the Bay is formed by a mountain range that runs into the sea about 15km looks like the head of a unicorn.

Xuan Dai brings a distinctive feature is the smooth clean sand, pure. Located in the nominations the most beautiful bays in the world, Xuan Dai Bay is one of the typical landscapes in Phu Yen.

Vung Ro is the best place for relaxing and sightseeing, it also has much sea food and variety of corals and suitable for fishing, swimming, diving. 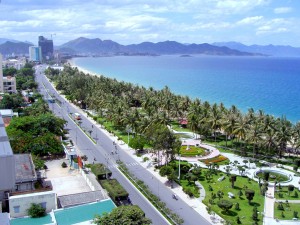 Nha Trang Bay – has definitely become too familiar by famous beauty of it. Together Ha Long Bay, Nha Trang Bay was officially recognized and ranked as one of the 29 most beautiful bays in the world. Be covered by 19 large and small islands. In Nha Trang , nearly ten islands oats , annual harvesting bird nests brought millions of dollars to the province of Khanh Hoa.

Nha Trang Bay is one of those rare patterns of natural systems in bays of the world because it is the most typical ecosystems, rare tropical waters.

Van Phong bay is about 80km north far from Nha Trang city. In recent years, Van Phong Bay has made a special attention of researchers and tourism operators in the world.

This is the ideal place to organize some kind of tourism such as sailing, fishing, scuba diving snorkeling and relaxation, healing, hiking … not inferior to anywhere in the world.

It situated Nha Trang City is about 60km to the south. Inside the bay there are coral reefs, colorful fish . This Bay has many beautiful beaches, coconut trees beside the towering green, creating the characteristic central coast. 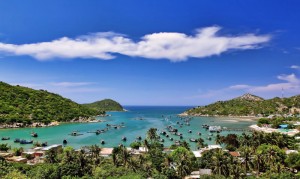 Vinh Hy Bay belongs to Vinh Hy village, Vinh Hai commune, Ninh Hai district; it is about 40km far from Phan Rang city. Vinh Hy Bay is surrounded by mountains with amazing caves, natural healthy climate, especially in the blue water and the tourists can see herds of anchovies swimming around the boat.

Ha Tien Bay has to 105 large and small islands. And Hon Nghe Island, where fish farming is growing and has many landscape.