Nha Trang City, a home of timeless history and rich Vietnamese culture surrounded by flat lands, mountains, rivers, and the ocean. With the occupation of countless minorities and the progression of timeless culture and traditions, the Long Son Pagoda stands tall and proudly represents the land of the old Champa Kingdom. 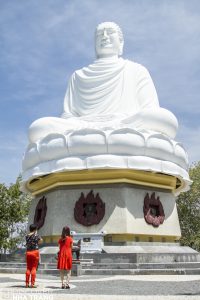 It was the year 1886 when the pagoda was built on a different hill as to where it is now. At the beginning of the 20th century, a big storm hit Nha Trang, which completely destroyed the temple; therefore forcing the locals to move the pagoda to another hill. In 1936, the temple became the headquarters of the Buddhist Association. Later on in the 1940s, it was renovated and expanded.

And during the war in 1968, the temple was yet again damaged, creating major destructions on the roof. Eventually in 1971, a restoration program was organized. Today, you can see that the temple is well maintained and completely repaired visited by a large number of tourists on a daily basis.

Visiting the pagoda for the very first time might feel a bit confusing as the information around the site are not very well displayed. If you come on your own, there is a parking space provided inside the vicinity where you can leave your vehicle safely for about 5.000VND.
Upon entering the gates, will directly see the first pagoda, which is called Long Son.
You’ll be able to recognise it by looking at the roof where intricate mosaics and dragons are meticulously sculpted. Always remember that the entrance is free but some locals will still ask you to pay for it. The best way to handle this is to go directly to the entrance and take the 152 steps towards the pagoda while politely ignoring the people on the side.

Once you reach the top, you will be welcomed by the 14 meter high white Buddha sitting on a lotus blossom. The magnificent aura and imposing stature will definitely impress you in a good way. Together with the Big Buddha, you’ll be able to see a statue of Thich Quang Duc and the six other Buddhist monks that set themselves on fire in 1963.
A disturbing yet hopeful reminder of what the Vietnamese people have gone through in the last few decades before becoming an independent country.
Visiting this place at least once when you’re in Nha Trang is definitely a must do. It is full of history and like many other pagodas, is can be calm and relaxing despite all the intense walking around the area.