A Tale of Dragons

The Dragon, in the Vietnamese belief system, is a supernatural creature closely associated with Vietnamese people’s lives. The dragon symbolizes luck, intelligence, nobility, and power, and leads the 12 zodiac animals. Vietnamese people believe that the year of the dragon is a prosperous year, and parents are very happy to have children during the dragon year.

In the Vietnamese culture, the dragon symbolizes the supreme power of the King. The dragon’s association with royalty is revealed by the names given to the king’s personal effects a – long bào (royal tunics), long châu (royal boat), long thi (royal person), and long điện (royal countenance) – “long” being the Vietnamese word for both “Dragon” and “Emperor” in Vietnamese culture. 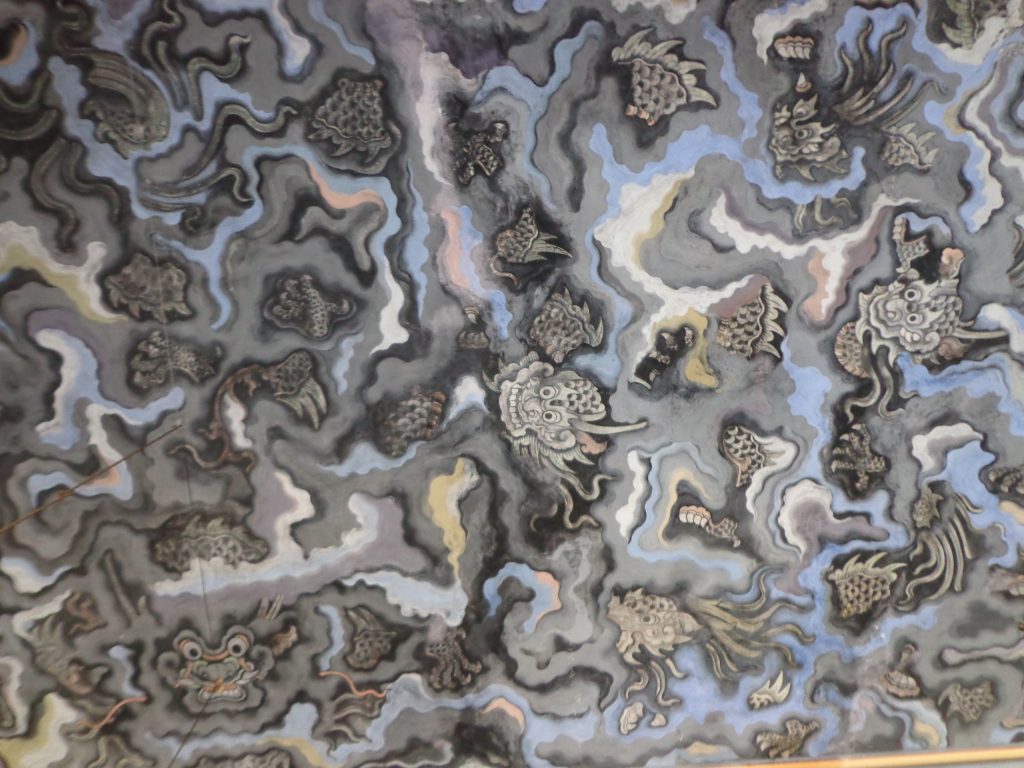 The dragon tops the 4 sacred animals, followed by the unicorn, the, tortoise and phoenix. Images and depictions of dragons are widespread in architectural decorations in Royal palaces, temples, pagodas and tombs. The S-shaped curves are noticeable in Vietnam from North to South. A dragon decoration in pagodas and palaces always has its head up, its wide mouth holding a jade stone, a flame-like crest and its body flying together in one movement, creating a close-fitting structure. The image of the dragon has been modified over time by different dynasties in Vietnamese history.

The unicorn, the second mythical animal of the 4 sacred animals represents prestige, peace and good luck. The unicorn has a strange appearance, half dragon-half mammal; sometimes it has only one horn, which it never uses to harm anyone as it symbolizes mercy. The Vietnamese believe that the unicorn is a strong and faithful animal, suitable for guarding pagodas and places of worship. The third animal is the tortoise, the symbol of strength and longevity.  There is a myth about the tortoise god, who helped King An Duong Vuong build Co Loa Citadel on the outskirts of Hanoi. The famous Hoan Kiem Lake or Lake of the Restored Sword, in the center of Hanoi, is associated with a myth about King Le Loi in 17thCentury. He returned the sword to the tortoise god after defeating his enemies. A one-hundred-year-old tortoise is believed to still be living in the lake and the legend continues.

The phoenix is a beautiful and noble bird, and is often referred to depict The Queen in the royal periods. The Vietnamese people believe that a phoenix will offer prosperity in areas in which it settles. The combination of the dragon and phoenix represent lovers’ happiness, good luck, position and fame. Images of the 4 sacred animals are integral parts of Vietnam’s culture, reflecting a desire for peace, prosperity and happiness.

Dragons were also associated with kingship. Every Vietnamese person knows the legend of Lac Long Quan and Au Co. Lac Long Quan (Dragon King of the Lac Bird Clan) is known as the forefather of the Vietnamese people. He is said to have been the son of a dragon, while his wife, Au Co, was the child of a fairy. Their eldest son, King Hung, taught the people to tattoo their chests, bellies and thighs with dragon images to protect themselves from aquatic monsters. 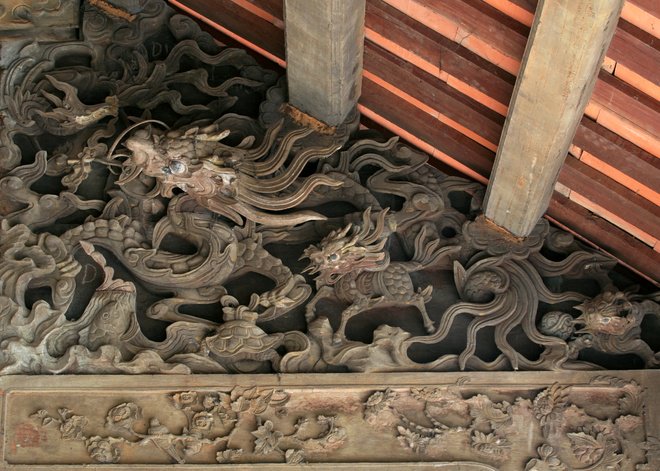 This is the origin of the Vietnamese proverb: “Con Rồng, cháu Tiên” or “Children of Dragon, Grandchildren of Fairies”. The dragon appears very early in the Dong Son culture. Carvings are found on Dong Son drums, depicting the Viet people’s tradition of worshiping cloud, rain, thunder and lightning to encourage bumper harvests. The Dragon was the symbol of prosperity and power for Vietnam’s feudal regimes. In the autumn of 1010, King Ly Thai To moved his capital from Hoa Lu in Ninh Binh Province to Dai La Citadel.

Legend has it that when the royal barge landed at Dai La, the king saw a golden dragon rise into the sky. Taking this as a good omen, he named his new capital Thang Long (Ascending Dragon), known today as the capital, Hanoi. 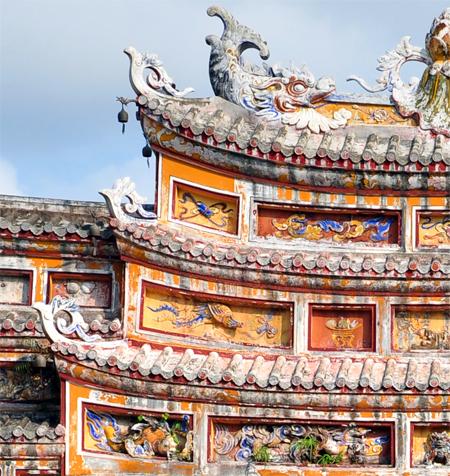 During the Ly dynasty from the 11th to the early 13th centuries, depictions of the dragon were both sophisticated and unique. The dragon’s elaborate head is raised, its flame-colored crest thrusts out, and a jewel is held in its jaws. Its mane, ears and beard flutter gracefully behind, while its lithe, undulating body soars above the waves. Its perfectly round body curves in a long sinuous shape, tapering gradually to the tail. The body has 12 sections, symbolizing the 12 months of the year.

During the Tran Dynasty (early 13th to end of 14th century), the dragon retained the sophisticated style of the Ly dragon, yet changed to reflect the greater authority of the dynasty which defeated invading Mongol forces three times. The image became more detailed, with a large head, forked horn, four fierce a claws (such as in a stone carving at Boi Khe Pagoda), and a massive, rounded body, covered in carp scales (Pho Minh Pagoda).

The dragon took on a whole new appearance under the Le Dynasty (early 15th to end of 18th century). With a raised head, forked horn, wide forehead, prominent nose, large, forceful eyes, five claws, and two splayed feet, the dragon creeps up the balustrade of Kinh Thien Hall’s central staircase in Thang Long Citadel, Hanoi. This fierce and imposing dragon was clearly a symbol of royal authority. Examples of Le era dragons may be found carved in stone in Co Loa Temple, carved on wooden doors in Keo Pagoda, and carved in the royal stone bed at Dinh Temple.

The dragon has an important place in Vietnam’s cultural life with dragon dances, dragon boat races, and children’s games of Dragon-Snake. S-shaped Vietnam itself is shaped like a dragon. 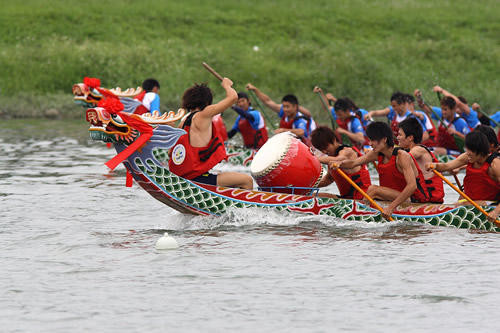 Many place names in Vietnam bear the word long (dragon), such as the Cuu Long River (Nine Dragons) in the Mekong Delta, in Ha Long Bay (Where the Dragon Descended), and Bai Tu Long (Where the Child Dragons Descended). That is why many boats in Hanoi Bay or Bai Tu Long Bay are decorated with a powerful dragon head at its bow. Emperor Cruises has been decorated with the dragon of the Nguyen Dynasty’s dragon motifs on both sides of the boat. You can also find antique objects with dragon and phoenix decorations or motifs of the Nguyen Dynasty aboard. 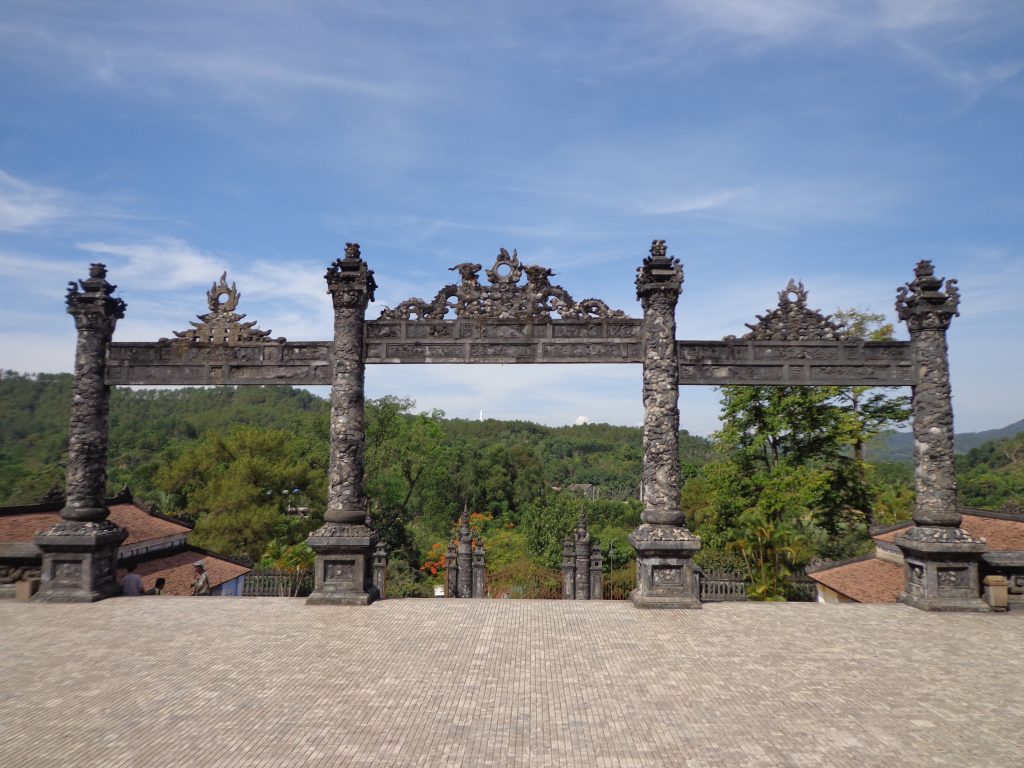 Initially, dragons in Vietnam were associated with water and Yin energy. They were popular among the common people, who believed that rain was created by nine dragons, who took water from the sea to pour down on the rice paddies. The dragon dance, a great favorite among people from all walks of life, was used to invoke rain.

Like Chinese monarchs, Vietnamese sovereigns chose the dragon as the symbol of their power. But unlike the Chinese dragons, which were shown descending from heaven and spitting fire, the Vietnamese dragons were shown ascending from water. Though imposing and fierce, the Vietnamese dragons were never threatening. The Nguyen Dynasty (early 19th to mid-20th century) had dragons much like those of the Le. The top ridges of palace roofs were decorated with undulating dragons covered in sparkling porcelain tiles.

The Nguyen Dragon was in the highest position, on crowns, golden and jade seals and many royal objects. We can see the Nguyen dragon in the King’s tombs in Hue’s famous Citadel. The dragon was represented with a spiral tail and a long fiery sword-fin. They were combined with other sacred animals in the four supernatural creatures or they were incarnated in precious trees, including pine-tree, butter­cup, ivory-bamboo and apricot. 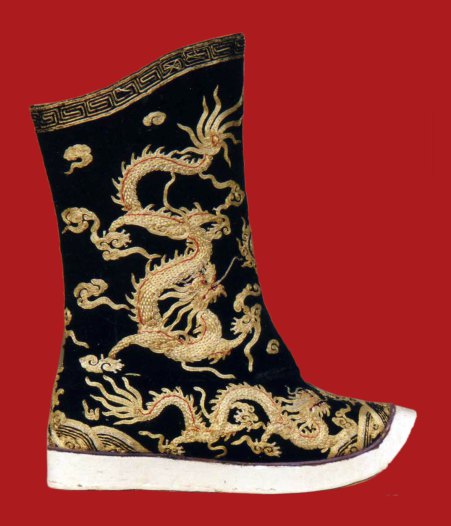 According to historic texts, dragons have been present in Vietnamese culture for at least 14 centuries. In every dynasty, dragons were connected closely with power. In addition, they were manifested in sculptures, pagodas and temples, where they are described more vividly.