Che or Tra, is still confused even by Vietnamese people in daily language, and although many foreigners believe all teas in Vietnam are simple green teas, this is not really the case. Tea drinking has been a tradition of the Vietnamese people for over three thousand years and is an integral part of Vietnamese culture. Present everywhere from daily life to holidays and weddings, tea brings friends and family together in conversation and celebration. As a Vietnamese person, I newly discovered our drinking culture and its sophistication when cruising aboard a luxury boat. I loved the tea demonstration and the introduction of tea aboard Emperor Cruises on the pristine Bai Tu Long Bay. The demonstration allowed me to really understand the art of drinking tea, from the countryside folk and Montagnards to regular people and royalty.

There are many aspects of tea culture worth noting. The therapeutic and medicinal functions of tea are well known. In humid weather, hot tea is devoured for its surprising cooling effect, and in cold weather for its warmth. There are many types of tea in Vietnam, each with its own unique flavor and properties. Tea cultivation, its historical influence in Vietnam, its relationship to the environment, its economic impact on the ethnic minorities who grow it, combined with the aesthetic aspects and social importance of tea-drinking rituals, could all provide topics for extensive research. 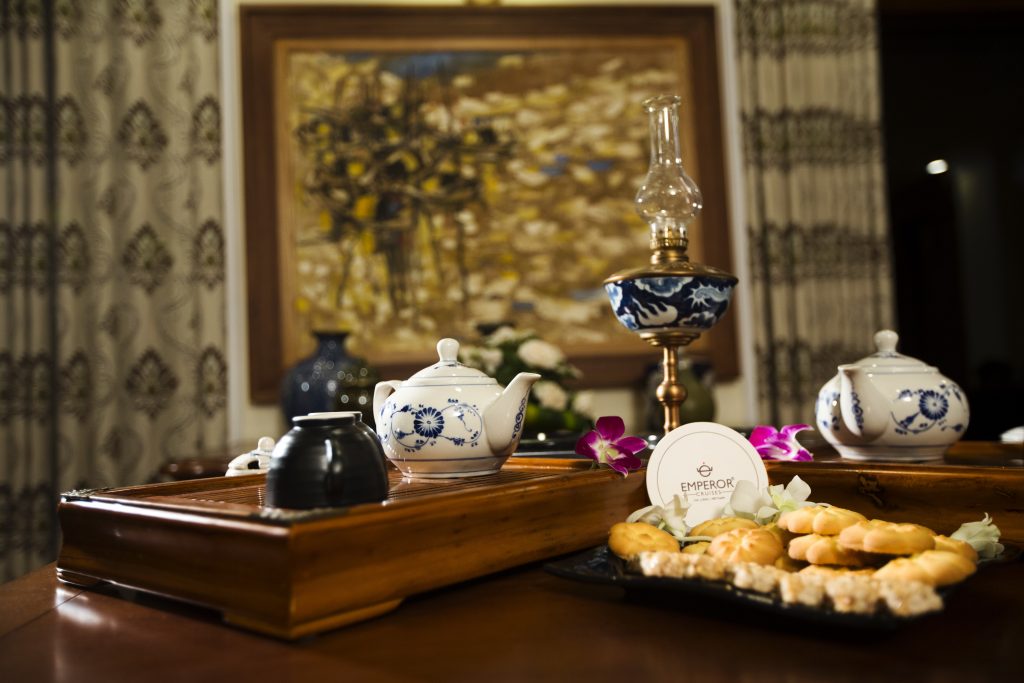 Like many locals, I often drink ‘Tra Nong’ (Hot Tea) or ‘Tra Da’ (Iced Tea) when I have a few moments to myself. My parents in the countryside of the Red River Delta drink green tea at home and in their fields daily, as their parents, grandparents, and ancestors have done since the old times. There are many original varieties of tea enjoyed in Vietnam such as green tea, black tea, perfumed tea, or tea with flowers. The countless methods in which to prepare and enjoy them are very interesting to discover.

Vietnam is among the top tea producers in the world, and the people have a habit of drinking tea every morning, after lunch and on special occasions. A cup of tea is always a good excuse to start a relaxed conversation or serious discussion and is also very important to show hospitality to guests that visit your house. They often drink  “tra man”, fresh tea buds with some dried leaves that are steeped in water.

In the countryside, locals collect the green leaves of the plants, toast them and boil them. They keep it warm in a ceramic teapot used by the whole family, and every household will have the same teapot for many years. Sometimes, they bring it to the fields and drink tea on their lunch break.

In the mountainous areas, the Montagnards drink so called ‘Shan Tuyet Tea’, which has a special processing technique. The fresh tea buds are as big as banian buds and coated with lanugo. After being processed, they are covered with a milky layer of “snow,” (shiny aromatic herbs) and the gas that is released is then inhaled. When drinking it, the tongue will feel a slightly bittersweet taste that is followed by a persistent sweetness in the throat.

If travelers go to Suoi Giang in the tea harvesting and processing season, they will smell a characteristic flavor of this tea region. Due to the special climate here, locals do not have to use any kind of pesticides because pests are not an issue. In the winter, there is little sunlight, and fog covers the entire region. The tea buds are also covered by fog and you will feel a biting cold on your fingers when picking them. 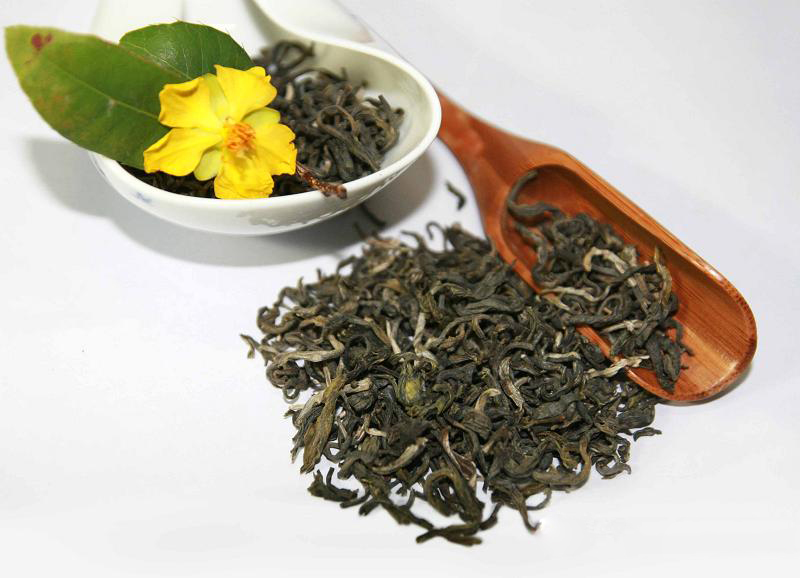 The tea trees here are over 300 years old. Their trunks and buds are very impressive, which makes them different from other types of tea. Shan Tuyet tea varieties have all three main characteristics: aroma, a strong taste and blue water. The tea, from harvest until processing, is produced manually by the Mong ethnic people here.

Although without much of the ceremony associated with Japanese tea culture, Vietnamese tea culture is not without its own sophistication. The art of drinking tea is based on the tea preparation, the invitation to the guests, and the act of enjoying the brew. The tea connoisseur says, “Nhất thủy, nhì trà, tam bôi, tứ bình, ngũ quần anh” which translates as, “Of most importance is the water souce, the second is the tea variety, the third is how to prepare tea correctly, fourth comes the tea pot, and fifth is loved ones enjoying it together”. Drinkers can imbibe it solo (nhat am), in pairs (doi tam) or in groups (quan am). Depending on the particular situation, there are various sized teapots used for different occasions.

Vietnamese tea drinking is simpler than the Chinese or Japanese customs, but it bears the essence of Vietnamese culture. The yellow and green of the tea and the natural scent of flowers symbolise the country, rich in culture and natural resources. Bitterness in the first taste reflects the hard-working life of the people, while the sweet and cool aftertaste that lingers evokes the Vietnamese soul – sentimental and faithful.
A tea course requires a brazier, a boiling pot, an earthenware pot of cold water (usually rainwater, and on special occasions, some dew gathered from lotus leaves). To serve, one uses a teapot, teacups, a tea box, and a few pieces of aloe or aromatic wood.

The host will boil the water for a few minutes, then take it off the fire and let the temperature drop to about 80-90 degrees Celcius. It is poured gently into the teapot, and then covered tightly for about five minutes. While the tea is brewing, tea connoisseurs will comment on the fine aroma of the tea, always keeping it as the focus of the conversation, as you would do when wine tasting. From the teapot, the tea is poured into a large cup called a soldier-cup.

This procedure ensures an even distribution of the tea’s flavor and color. If it were poured directly into each cup, the first cup would be more diluted than the last. As you sip the tea, discuss its taste and the mood it brings you. “A tea server slowly pours tea into cups from a teapot. The pouring is performed gracefully, in a manner known as ‘high mountain-long river’, which helps the scent of the tea spread evenly. Offering it to guests, the host holds the cup with three fingers, offering the tea in that symbolizes ‘three dragons flanking a pearl’.

That’s only a snapshot of the tea drinking culture of the Vietnamese people. “Enjoying a cup of tea and thinking about life helps people to be good and avoid evil,” Quang says. Four words – Hòa, Kính, Thanh and Tịch – are used to describe the intangible aspects of tea drinking. Hoa means peace, Kinh implies respect for the elderly and friends, Thanh means tranquility, and Tich signifies leisure.

Quang says serving tea correctly is an elaborate ritual. For starters, you have to choose your teapot and cups with care, and they must match the tea. “The cup also changes according to the season. In winter, it should have a bottom and rim of equal size, so it doesn’t lose its heat, and the drinker can hold it inside his palm. But in summer, tea should be served in a cup with a larger rim, so it can cool quickly,” he notes.

All the pots and cups are cleaned in boiling water, which gets rid of the dirt and warms them up. Dried tea leaves are put inside the pot, which is then filled with boiling water and covered. More hot water is poured over the pot, so that it is heated both inside and out, and the leaves are thoroughly brewed. It can be said, that Vietnamese tea is a sophisticated art which takes lots of time to master. However, it can, of course, be enjoyed in a very simple manner.” Tea types can be divided into three kinds with different properties, including dried tea leaves, tea combined with herbal remedies and tea scented with flowers. 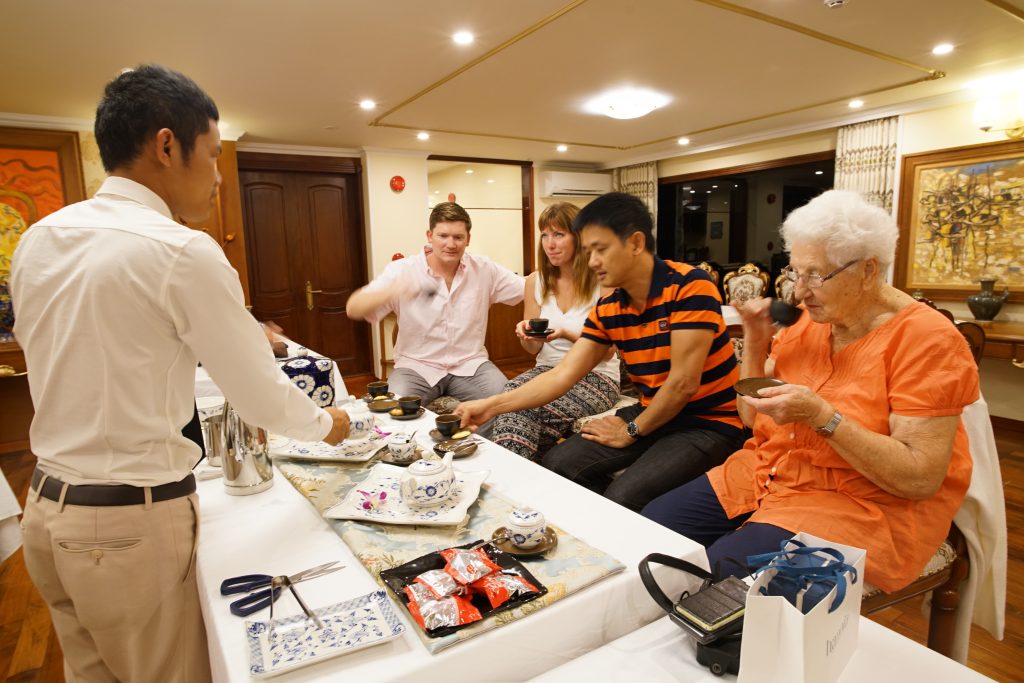 Lotus-scented tea for the King

Besides unscented green tea, teas with the scent of flowers are unique examples of Vietnamese tea culture. The whole process is completed by hand, in a very careful manner, to transmit the natural scents into the tea. There are many varieties of tea enjoyed in Vietnam with flowers. Among them is jasmine tea (tra nhai) or lotus tea (tra sen).

Enjoying this tea is a traditional ceremonial art of the Imperial City of Hue. During the Nguyen Dynasty, imperial maids used to row to Tinh Tam Lake to collect dewdrops from the sen leaves to make tea. The maids served it to kings in special teapots, one for each of the four seasons.

“Lotus tea has its own summer teapot, for example,” says Quang –  our tea expert on board Emperor Cruises Halong. “Sen flowers grow in all of the country’s rural areas. But a sen tea connoisseur prefers tea scented by flowers that grow in Tinh Tam Lake, where the lotus flowers are much more aromatic than from elsewhere”, he explains.

Lotus flowers bloom from early May through June. This is the season when dried tea leaves are traditionally placed in newly opened lotus flowers, and then tied to perfume the tea.”When the lotus flowers opened at midnight, the tea leaves were placed inside the flowers. At 5am, these same flowers were then harvested to make tea,” adds Quang.

Lotus flowers for fragrant tea should be picked before dawn. Cool air and fog help to preserve the light, pure fragrance of sen, because, after sunrise, sen loses its fragrance due to the heat. In the past, lotus tea was only served to kings in Hue, Minh Mang and Tu Duc. Emperor Bao Dai is among some of the famous rulers of the past who loved to enjoy tea daily.

Nowadays, everyone can enjoy lotus tea aboard Emperor Cruises Halong, and the surrounding villages and areas are famous producers. For example, Quang Ba, Tay Ho and Nghi Tam Villages have long been renowned for making high quality lotus-scented tea.

“As a result, many Hanoians have known for generations how to enjoy lotus tea in the most sophisticated, precise and stylish way”, added Tuan Nguyen says. West Lake lotus tea is considered the most precious lotus tea because of its beauty and aroma.

There are also many closely guarded secrets for making tasty lotus-scented tea. “One method involves layering dry tea and dry lotus anthers, then wrapping them in a water-resistant paper for three days to preserve the delicate fragrance. This process must be repeated seven times for three weeks to make the most perfect sen tea”, says Mr. Suong, who learned the art from his father.

20th Century writer Nguyen Tuan, praised lotus tea for embodying the highest cultural values of the Trang An (an old name for Hanoian natives). “It reflects the precision, style, elegance and connoisseurship of Hanoian culture, and Sen Tea is the most precious and popular perfumed tea”, he remarked.

The sen fragrance embodies the essential qualities of earth and heaven. “Lotus plants grow in black mud, but never smell bad. Therefore, the lotus represents the most important qualities of sky and earth. This is why the lotus roots, leaves and flowers are precious herbs,” said Vietnam’s most renowned herbalist, Hai Thuong Lan Ong (1720-1791).

The tea connoisseur and renowned painter, Mr. Pham Luc, enjoys lotus tea for its aromatic fragrance, compared to other teas. “Tra sen is a national heritage which should be preserved,” Luc says.