While skateboarding is not something we traditionally think of regarding sports in Nha Trang, there is a growing community of youths who are becoming actively engaged in it, and are starting to excel

On June 25th, Vans held a domestic skateboarding competition and welcomed skate enthusiasts from around the country to show off their skills. Our very own Nha Trang resident, Ren Boon (a.k.a Phuoc), scooped the Top Prize after wowing the judges with his impressive repertoire of tricks.  Discover Nha Trang caught up with the man of the moment to find out more about skate culture in Nha Trang.

Discover Nha Trang caught up with the man of the moment to find out more about skate culture in Nha Trang. 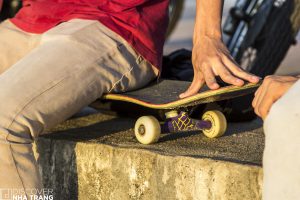 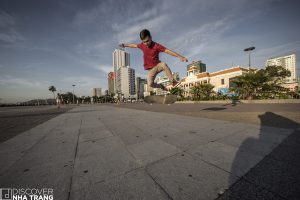 DNT: With so many different kinds of sports around, why did you choose Skateboarding?

Ren: Yeah, There are different kinds of Extreme Sport, but Skateboarding appeals to me the most. You need a lot of strength and coordination, and I enjoy that. It just gives me a sense of enjoyment that I haven’t found in any other sport that I’ve tried.

DNT: How long have you been Skateboarding, and what go you into the sport?

Ren: I have been a boarder for almost 8 years.  I still remember the first time I saw a skateboard. It was 6th April 2008, and one of my friends gave me a Chinese Children’s Skateboard. I was really excited to try it and found out there were some other skaters in town. Soon after, we started to hang out and skate together, and we formed the first skateboarding group in Nha Trang.

DNT: How did your family perceive your love of skateboarding, and what other difficulties did you face?

My mother often worried that I would hurt myself when trying new tricks on the board. My dad used to get angry as I was out all day skateboarding and would often come home late at night. But once they saw me in action, and saw the passion that I had for it, I got their full support. Now they are my biggest fans.

Other than that, there has been a very small boarding community here in Nha Trang, and the sport needs more people to compete and grow. In the beginning, it was so difficult just to even buy a decent skateboard in Nha Trang, but now I have my own Skateboard shop, so I can supply the best equipment to all my friends.  I used to learn new skills by watching YouTube videos online but it’s better to learn in person. The more people that do it, the better it is for us all, and we can learn from and teach each other new tricks. Nowadays, we get lots of boarders visiting from different parts of Vietnam, and even abroad, so it’s becoming a bigger community. I love the whole culture, and besides it being great for your health and fitness, I really like the fashion style associated with it.

DNT: So what do you need to be an awesome Skateboarder?

For me, passion is the most important thing to be a good boarder. Being able to pick yourself up after you fall or injure yourself – when you’re trying out new skills, injuries will often happen, so you need to be determined and motivated to keep trying until you succeed. I will never forget one of my most serious injuries was at a Go Skateboarding Day in HCMC, in 2009. I was the 5th contestant to perform, and the four guys who went before me had scored big. So i was under pressure to perform, and think I’d actually over trained. During a 50-50 Grind trick, my board flipped and I got my arm stuck in an iron bar.  I ended up dislocating my shoulder pretty badly, and was taken to the hospital. But once I healed up, I was straight back out on my baord practicing again. If at first you don’t succeed – Try Again!

DNT: Last month, you won the Vans Go Skateboarding Day 2016 organized in HCMC. Can you please share with us some more information about this Contest?

Vans Go Skateboarding Day 2016 was the second competition they have held in HCM. Last year, I competed and finished in 3rd place, so I was eager to come back this year and try to win it. Thankfully,  I performed well and won the event, so I was super happy. Two of my friends also picked up prizes, so it was great for our Nha Trang community to go down there and compete with some of the best in the country. 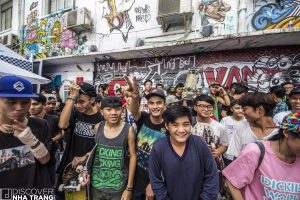 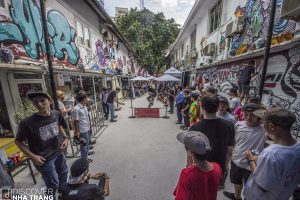 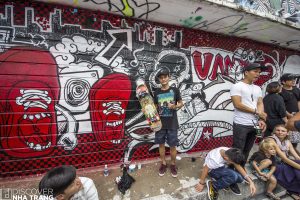 DNT: What were the keys to your victory?

I guess just having a strong belief in my skills and preparation. I tried to keep calm and have a clear mind for each section of the event. There were different technical skills in each section that were needed to advance, and I nailed all my tricks to be the only person to complete them all.

DNT: So what are your plans for the future in Skateboarding?

I just want to  keep improving my skills and learn new tricks, and keep growing as a Skateboarder. I also want to expand my store (RB Skateshop), and develop my own range of branded clothing products for Skateboarders.

DNT: Thanks Phuoc, and congratulations again on your big win! 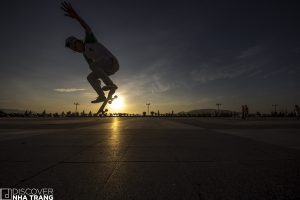 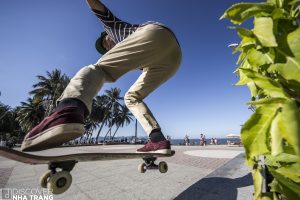 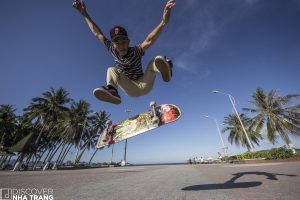 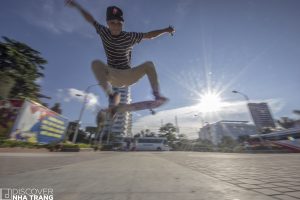 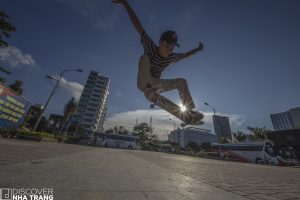