FOOD FIT FOR AN EMPEROR

Along with exploring new cultures, one of the great joys of travel is the discovery of new cuisine. Those unfamiliar with Vietnamese food are in for a treat, as the national cuisine is flavorsome, colorful and extremely healthy.

Northern Vietnam has long been influenced by its proximity to China. As the only part of the country that experiences four seasons, many dishes are only available on a seasonal basis. Overall, the food tends to be milder and lighter than that found in the rest of Vietnam.

Southern Vietnamese cuisine is the most varied. Rich in vegetables, rice and seafood, it has incorporated French, Cambodian and Thai influences into a style that is distinctively its own. It is generally more heavily seasoned, tropical and spicier, yet sweeter than northern food.

Purists claim that central Vietnamese cuisine is the most culturally authentic food in the country. Heavily influenced by the Imperial Court cuisine of Hue, the food is generally very spicy and well-seasoned. If you ever visit Vietnam’s former capital of Hue, in Central Vietnam, be sure to enjoy Hue royal cuisine, which is famous for its subtle flavors, nutrition, and beautiful presentation.

Considered a unique and important part of Vietnamese culinary culture, Hue royal cuisine features dishes prepared under the Nguyen Dynasty (1802-1945) for members of the royal family, and for imperial celebrations and ceremonies.

According to Ms Ton Nu Ha, a descendant of the family, who for many generations, were chefs at the Imperial Palace, most of the ingredients used in royal cuisine are the same as in regular dishes. The fundamental differences lie in the cooking methods, artistic decoration and the manner in which they are served.

Every meal of the Emperors included some 35 to 50 dishes, of which the highlights were known as “bát trân” (the eight most highly prized dishes in the royal palace).These dishes often consisted of the most unusual ingredients including peacock, rhinoceros skin, bear paw, deer tendon, orangutan lip, elephant leg and swallow’s nest. Today, out of the 8 dishes most favored by the Emperors, only bird’s nest is still widely available as the others are now considered endangered species which have to be protected. 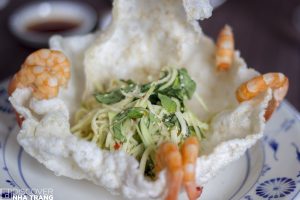 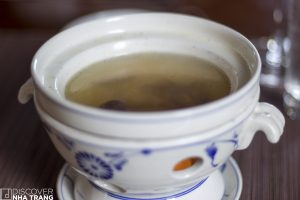 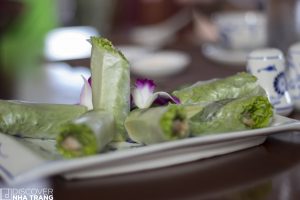 In the royal household each chef prepared just one dish. Royal parties were divided into different types, such as the big party with a menu of 161 dishes, the breakfast party with 12 dishes, and the vegetarian party, who made offerings of 25 dishes to their ancestors at the Pagoda.

Hue researcher, Nguyen Dac Xuan, explained the diet of the Nguyen Dynasty Emperors in his book “Lễ Tết ăn chơi trong cung Nguyễn” (Dining and festivities in the Nguyen Dynasty’s Royal Palace), explaining that the rice cooked for the Emperor was a type of aromatic rice grown in the fields of An Cuu village (to the south of Hue). The rice was carefully selected then cooked in a special pot made only from the clay found in Phuoc Tich Village in Hue’s Phuong Dien District.

Prior to cooking, the clay pots were boiled in fresh tea, and each pot was used just once before being destroyed. The water to cook the rice or to make tea for the Emperors was taken from Ham Long Well at Bao Quoc Pagoda (one of Hue’s many ancient pagodas). Sometimes the water was also taken from Tuy Van Pagoda in Phu Loc district, about 50km from the centre of Hue, or even from the source of the Huong (Perfume) River.

Bowls and plates in the royal palace were made from ceramic and decorated with images of five-clawed dragons. Under the dynasty of Emperor Dong Khanh, the imperial palace added glass tableware from Europe and, under Emperors Khai Dinh and Bao Dai, tableware such as bowls, plates, knives and forks were also used to serve meals in a Western style.

Chopsticks and toothpicks for the emperors were made from bamboo by skilled craftsmen. Sometimes the emperors also used chopsticks made from “kim giao” wood, found on Cat Ba Island (near Ha Long Bay).This wood was chosen to guard against poisoning, because “kim giao” wood is white in color but turns black after coming into contact with any substance. Like the clay pots, each chopstick was used only once.

The methods to cook royal dishes were passed down orally from royal chefs to their descendants. However, in the early 20th century, Ms Truong Dang Thi Bich, the daughter-in-law of a mandarin settler and poet under the Nguyen Dynasty, wrote the cookbook, “Thu Pho Bach Thien”, to teach her daughter how to cook 100 Hue dishes. What is particularly special about the cookbook is that the recipes are written in poetry of four line stanzas, which makes them easy to remember.

Ms Ton Nu Ha is well known as a famous chef and artisan who preserves the spirit of Hue royal cuisine. She has travelled to many countries in the world to present not only the art of Hue royal cuisine, but also popular Hue dishes. At her Tinh Gia Vien Restaurant in Hue, you can try typical Hue specialties, join a cookery class or learn how to carve fruit and vegetables into works of art. 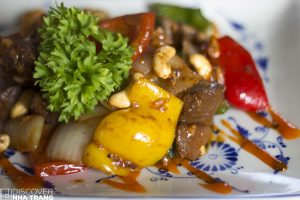 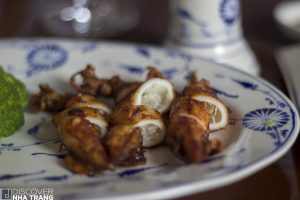 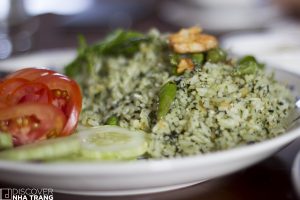 Bird’s nests are harvested year round using a bamboo pole, a traditional method that has been used for hundreds of years. There are some 40 islands and 136 caves in Nha Trang Bay which the salangane calls home, and there are several varieties of yen sao which are processed and exported all over the world.

In Nha Trang, you can find several varieties of bottled Yen Sao drinks and healthy dishes in restaurants or on Emperor Cruises, such as Yen Sao Soup, which is usually cooked with chicken, crab or sea cucumber, and Che Yen (Yen Sao Sweet Soup) for dessert, cooked with lotus seeds, fruit, sugar and fresh milk.

Tourists visiting the city can enjoy an Imperial Cruise inspired by the lavish lifestyle of the Emperor Bao Dai. Emperor Cruises in Nha Trang and Halong Bay offers daily cruising options where royal salangane bird’s nest soup and other specialties fit for an emperor are served. The imperial banquet is made more memorable as guests dress in fine imperial clothing to recreate the regality and aristocracy of a royal dining experience..

Emperor Cruises (www.emperorcruises.com) has crafted a culinary treat for the most discerning of palettes at Can Chanh Royal Restaurant, located on the main deck of the luxury cruise boat. The cuisine is always freshly prepared, using the best local ingredients, with an emphasis on seafood.  Each overnight trip includes breakfast, lunch and dinner. With every meal on board, guests are treated to a rich selection of complimentary local beers, spirits, and distinctive wines chosen by acclaimed sommeliers. Barbecues and private beach dinners are  also available upon request. 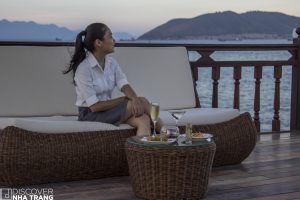 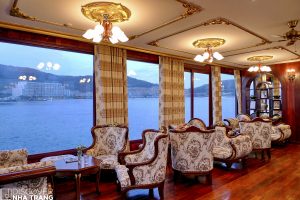 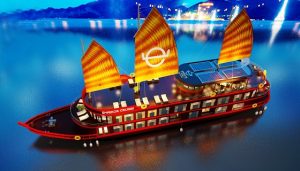